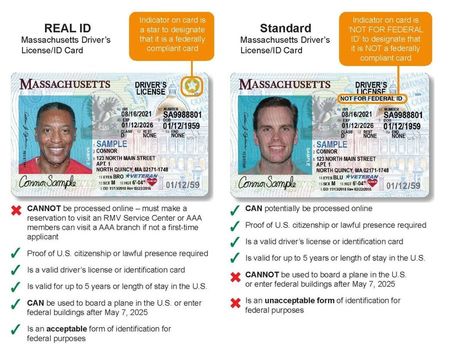 If you haven’t upgraded to a REAL ID yet, you can once again breathe a sigh of relief.

The Department of Homeland Security (DHS) announced Monday that they will not require REAL IDs for domestic air travel until May 7, 2025. This is two years past the previously set enforcement date, May 3, 2023.

“This extension will give states needed time to ensure their residents can obtain a REAL ID-compliant license or identification card. DHS will also use this time to implement innovations to make the process more efficient and accessible,” Homeland Security Sec. Alejandro Mayorkas said in a news release about the extension.

The extension is necessary to address the lingering impacts the COVID-19 pandemic has had on citizens’ ability to get a REAL ID, the DHS said.

Many RMVs and DMVs responded to the pandemic by extending the expiration dates of driver’s licenses and identification cards and shifting operations to appointment only, the DHS said. This has created a backlog which has made it difficult to obtain a REAL ID.

REAL IDs were supposed to become mandatory for domestic air travel in 2008, but the deadline has been pushed back several times, including twice during the pandemic.

Congress identified the need for REAL IDs after the 9/11 Commission found that almost all of the hijackers were carrying fraudulent driver’s licenses and IDs when they boarded the planes used in the terrorist attack.

Passed by Congress in 2005, the REAL ID Act created minimum security standards for state-issued driver’s licenses and identification cards to prevent this from happening again.

According to The New York Times, the introduction of REAL IDs has been plagued by confusion. Individual states, territories, and the District of Columbia are tasked with issuing REAL IDs, and they have different processes for obtaining them and inconsistent placement of the star symbol meant to show that a license or ID card is a REAL ID.

For information on how to get a REAL ID in Massachusetts, visit the RMV’s website.